An industry-coordinated, high-impact marketing campaign is ready to roll

On September 16, 2019, the heating oil industry announced its commitment to achieve net-zero carbon by 2050. One year later, on September 23, 2020, the industry announced its plan to phase out fossil energy from heating oil. These headline-making announcements were not shots in the dark — they were carefully orchestrated communications developed in close coordination between NEFI, PriMedia and our fellow industry stakeholders.

One of the key elements of the aforementioned plan is the need for consistent messaging on the economic and environmental benefits of Bioheat® fuel. This poses a significant challenge. Heating oil dealers are energy marketers; as such, many go their own route when it comes to marketing their products. This is especially true for products like Bioheat that were initially adopted as a differentiator.

How do we achieve industry-wide coordination around what was once a differentiator? How do we come to a consensus on messaging that is not only effective but also consistent enough to counter the utilities’ relentless disinformation campaigns?  The skeptics and naysayers might think it’s impossible, but I for one know otherwise. If decades of experience in this industry tell me anything, it’s that we can and will rise to the challenge. We have before. We will now because we must.

“Net-zero 2050” and “100% renewable fuel by 2050” are just two of the latest examples of industry-coordinated messaging that PriMedia has helped develop and deploy. Before there was consensus around Bioheat fuel, there was Oilheat America, an informational web and social media campaign we rolled out in partnership with the National Oilheat Research Alliance (NORA).

NORA dollars have also funded other non-competitive yet highly sticky campaigns such as the Upgrade & Save Energy Efficiency and Safety Rebate Program. Since 2016, this program has been used to help keep over 12,000 homes on heating oil. Talk about industry cooperation — Upgrade & Save has been leveraged by over 600 participating companies and 17 state or local associations up and down the East Coast.

These NORA-funded, PriMedia-developed programs prove that industry-coordinated consumer education can be done effectively and consistently. Of course, as net-zero 2050 proves, educating influencers and policymakers is equally important. Here too PriMedia has succeeded in developing consistent messaging in partnership with major industry associations.

By now, most Oil & Energy readers have probably already seen the map-based infographics PriMedia and NEFI developed to educate policymakers on the environmental benefits of Bioheat fuel. The first of these was done to illustrate the carbon reductions B5 could achieve for the New England states. Based on the success of that infographic, we have since updated it to communicate with policymakers throughout the nine-state Northeast on the benefits of B20 and B50.

Other national associations such as the National Biodiesel Board (NBB) have taken notice. To date, PriMedia has developed over two dozen infographics in coordination with NBB. Some of these highlight the environmental and economic benefits of biodiesel in a particular state, and some are meant to be used anywhere in the U.S., but all of them carry consistent, industry-coordinated messaging.

We haven’t stopped there. Indeed, as I write this article, PriMedia and NEFI are working together on a series of “industry snapshot” infographics that provide a close-up account of our industry’s positive economic and environmental impacts in particular states and congressional districts. Wherever possible — everywhere so far — this is being done with the support of the respective state associations.

This brings me back to the need for a consistent, industry-wide, high-impact marketing campaign. We know the industry can agree on messaging — we already do, by and large. Now is the time to take the next step and give our message the vehicle it deserves, a nationwide campaign.

Working in close coordination with our longtime partners at the American Energy Coalition (AEC), PriMedia has developed a series of three national marketing campaigns carrying consistent, high-impact messaging on the consumer benefits of Bioheat. Each campaign is ready for nationwide delivery via consumer-facing website, social media, digital advertising, podcasts, billboards, radio and other channels.

Over the past few weeks, we have been taking the campaigns on a kind of “virtual road show,” unveiling them to the major trade groups throughout the country. The feedback we have received to date has been overwhelmingly positive, and the campaigns are ready to roll. With that in mind, I wanted to take this opportunity to share our work with Oil & Energy readers.

Not coincidentally, the first campaign also provides the title for this very article. “Right Here/Right Now” combines lifestyle images of everyday people enjoying special moments with powerful subheads such as “Changing Nothing & Changing the World.” This reinforces Bioheat’s compatibility, ease of adoption and immediate benefits.

Because the campaign is purposely non-competitive, it can be funded using NORA dollars. The same goes for our second and third campaigns, respectively titled “See What’s Inside Today’s Bioheat Fuel” and “I’m/Be a Net-Zero Hero™.”

Each iteration of the “See What’s Inside” campaign frames a specific benefit of Bioheat — such as “Cleaner Air,” “American Jobs,” or a “Net Zero Carbon Future” — within the shape of a fuel delivery truck. This shows consumers that what’s “inside” that truck delivers advantages such as “Safety” and a “Lower Carbon Footprint.” Obviously, this would look great wrapped around a dealer’s own trucks or on a city bus, but we’ve found the message hits home even while swiping on a cell phone.

Perhaps best suited for internet and social media marketing is the “Net-Zero Hero™” campaign, which uses images of people holding up the number zero along with copy describing in compelling terms the transition to Bioheat fuel and net-zero carbon. Like the “Right Here/Right Now” campaign, “Net-Zero Hero™” is grounded in the fact that Bioheat empowers the everyday consumer to make a significant difference in shaping the future of our planet. Likewise, every dealer can tell their customers, “I’m a Net-Zero Hero™.”

As stated earlier, all of these campaigns are fully developed, NORA fundable and ready to roll today. (In fact, the Net-Zero Hero™ campaign was picked up by the New York State Energy Coalition as this issue went to print, and is slated to premiere at the end of October.) All of the campaigns can also be supported by periodic consumer surveys to help gauge their effectiveness across different platforms and adjust the rollout as needed. That being said, proponents of strategic electrification aren’t waiting for our industry to get on the same page. They’re counting on each of us acting out of step with the other. Let’s prove them horribly wrong, together. The time and place to move forward is right here, right now. 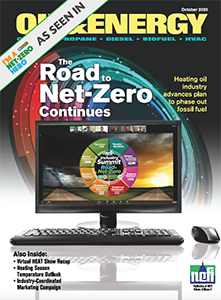